From March 10, a share of current public transport buses in Vilnius will be gradually replaced by 50 brand new buses Scania which will serve 4 routes. A consortium of Lithuanian and Latvian private carriers – UAB Transrevis and Rigas Mikroautobusu Satiksme (RMS) – which won the public transport services tender announced by the Vilnius City Municipality, in cooperation with Municipality Enterprise Susisiekimo Paslaugos, is implementing the third stage of public transport upgrade in the capital city of Lithuania.

“The record upgrade of Vilnius public transport initiated last autumn continues – by the end of this year in the capital city in total 250 new buses and 41 trolleybuses will operate. We honestly believe that when 50 brand new buses Scania start operating on city streets and the upgrade proceeds, Vilnius residents and city guests will notice the change and will choose the upgraded public transport, which represents a significant share of modern Vilnius, for their travels more and more often,” the vice-mayor of Vilnius Linas Kvedaravičius, who had a meeting with representatives of Scania from Sweden on March 10, says.

Over 10 million euros were invested into the new buses Scania by the consortium of Lithuanian and Latvian carriers. As provided for in the 7-year contract concluded with the Vilnius City Municipality in November of the last year, UAB Transrevis and RMS successfully implemented initial stages of the public transport upgrade in the capital city: 52 new medium-capacity buses Isuzu Citibus have entered the streets of the capital city which currently operate on 18 routes. Investments into these vehicles amounted to 6.8 million euro.

“Once the third stage of the Vilnius public transport upgrade is completed, 22 of 85 access and key routes in Vilnius will be serviced by new buses Isuzu Citibus and Scania Citywide LF. Our fleet will grow up to over 100 new buses – we believe that Vilnius residents and city guests will appreciate the new level of travelling quality and comfort of modern vehicles. In the next month, 50 new employees will join our team of drivers who will service route 4G with new buses Scania Citywide LF. We offer jobs for drivers in modern buses and competitive wages, as well as the opportunity to constantly improve their working skills,” Director of UAB Transrevis Vladas Dapkus says.

Upon an order of private carriers, 50 new tri-axle buses Scania Citywide LF which will operate in Vilnius were produced by the factory of the Swedish truck and bus producer in Poland. On March 9, in Vilnius UAB Scania Lietuva will deliver the first 22 buses to the fleet of UAB Transrevis. Other buses will arrive to Vilnius in smaller lots in the forthcoming months.

“This is the first forceful step of Scania into the public transport sector not only in Lithuania, but also in the whole Baltic region. We are truly glad that since now in Vilnius, as in Berlin, London, Warsaw, Brussel and other European capital cities as well, Scania buses will help solve mobility issues of city residents and guests every day. The new urban-type buses are distinguished by their excellent quality and convenience for both passengers, and drivers,” commercial director of UAB Scania Lietuva Darius Snieška says.

Modern buses Scania Citywide LF meet the highest environmental requirements applicable to diesel engines (Euro 6). Due to exceptional features of the new body structure Scania buses are of exclusive capacity. “These models are very economic, that is why we are very glad that our partners have selected them. In addition, UAB Scania Lietuva guarantees all servicing and repair services for these buses which will help service passengers more effectively and without any complications,” D. Snieška emphasizes.

In new buses passengers may use free internet connection, charge their mobile phones, the vehicles are adapted to people with disabilities and parents travelling with baby prams, and for safety of passengers, video surveillance cameras will be equipped. In addition, drivers of new buses will wear special uniforms.

Please note that in Autumn 2017 the biggest upgrade of the Vilnius public transport was started. For this purpose, two tenders were announced – the winning tenderer for selection of the new carrier was the consortium of two companies – UAB Transrevis and Latvian Rīgas Mikroautobusu Satiksme.

On 1st September 2017, the company launched Vilnius public transport renewal project under the agreement with the Vilnius City Municipality.

More than 100 new company buses carry passengers on 22 out of 85 popular routes in Vilnius.

The company has invested over EUR 20 million into new buses. 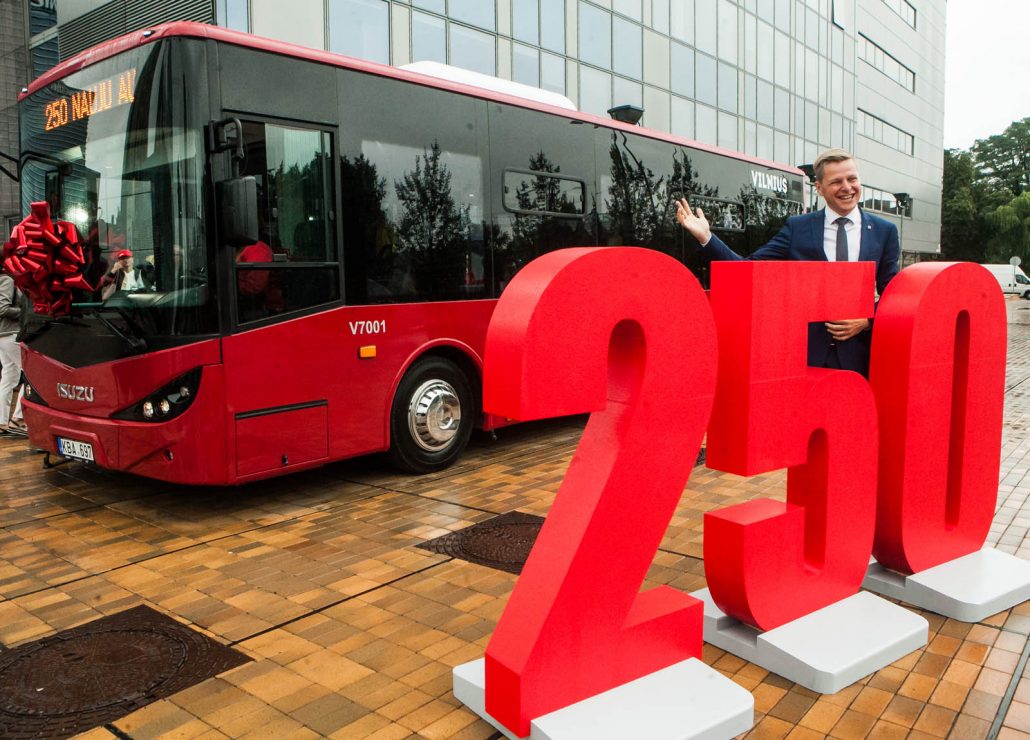